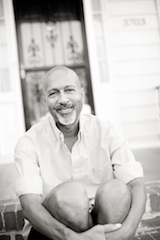 I won’t complain about 2013. There was some good stuff that came up along the way. But, as always, it could have used a little more artistic vroom-vroom. A lot more, if you ask me. Not that you are, but I’m telling ya, 2013 left me cold. I did (just recently) finish another draft of “B-SideMan”. Something I would send out, for sure. So happy about that since it kinda brought up all sorts of sore spots, fragility and downright weaknesses regarding yours truly. It’s storytelling, not a straight drama. It’s an extended monologue that I’m hoping captures everyone in it’s tale. We’ll see how the world receives this piece of Alonzo. Also, sometime this winter (Jan/Feb) I do believe I’ll be directing a Baltimore production (for Hopkins) of “The Telling Project”. This should be exciting and I think that being performed at Hopkins will make it even more memorable. Some details to be worked out, but so far I’m getting “that positive vibe” that’s so much in demand.

Also, I’ve been asked to come in a teach a session at Hopkins in a Dept. of Anthropology class! How great is that. It’s a course that explores ethnography and they want me to speak about how “East Side Story” came about. You never know how, down the line, these opportunities come along and sprout wings. That project was over a year ago, but someone wants to investigate the process. As they say, “how cool is that.”

And since I always get sentimental this time of year, I always reflect HARD when I come across the picture below…………..

The photo was taken ages ago right here in South Baltimore. That’s me, and that’s a microphone dangling from my hand. That’s a garbage dump where I found a desk and a chair. I thought it all fit. As far as “eye-catching” PR was concerned. People who’ve seen the picture today wonder “who’s the guy in the chair?” The Baltimore Playwrights Theatre had just opened, but it’s long since closed —– unfortunately, I think “Life Go Boom” helped forward that action. I still LOVE the play, but audiences didn’t seem to know what to think about it. It was also produced in the Old Vat Room at Arena Stage in D.C. It was hilarious. 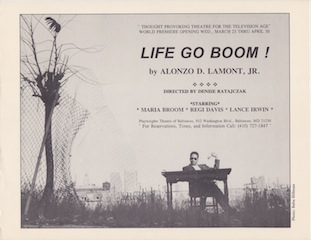