So as my independent projects rise (fingers crossed), I wanted to keep track of my recent stuff. Which BTW, I’m WAY proud of! These aren’t my ARCHIVES, but they go back aways. What can I say — it’s a fine line with me. Don’t ask what constitutes the difference between the two because I won’t have an answer. But let’s just say it’s all part of the LIFE OF ALONZO vibe. It may not fit the “chronological perspective” criteria for normalcy, but you’ll enjoy the ride. Hopefully this section fills in soon (fingers crossed). Let’s go back to “East Side Story” at Hopkins. 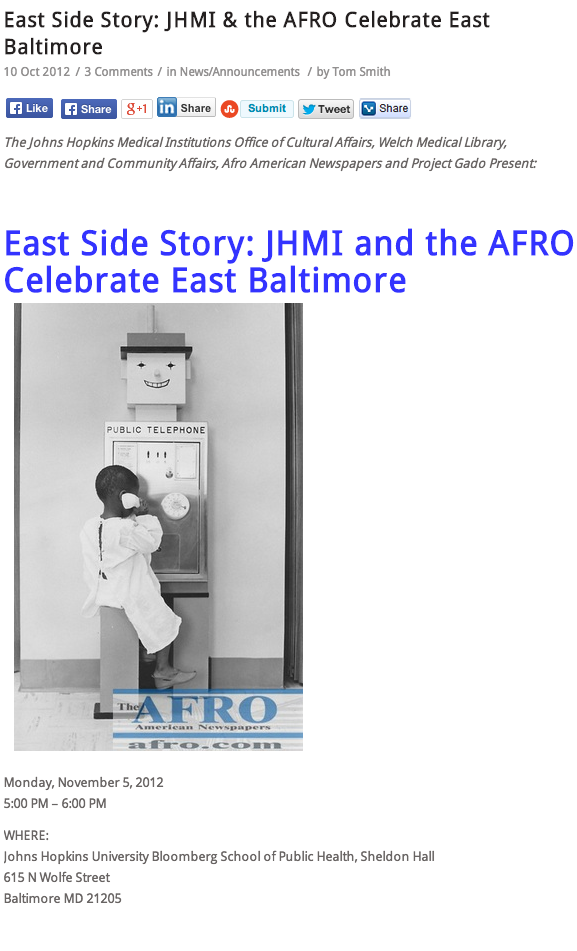 I worked long and hard with a cast of four to make this happen. This is an archival picture at Hopkins Hospital. How can you tell? Do the words “Public Telephone” ring a bell? We decided this would make a nice pic to advertise. It comes from the AFRO, and in essence, this is the nature of the performance. Pictures from the AFRO and short, written stories that I created around the pictures. The entire evening lasted less than an hour. And describing what it was took most of my energy, since they hadn’t had anything like this at Hopkins before. It wasn’t a full play. It wasn’t something the audience was familiar with. But it situated the AFRO and Hopkins in the same conversation. They were both created within a year or two of one another, but are both miles apart, am I right.

As you can see (this was my working script), we had all the details nailed down. It was a celebration of East Baltimore. STILL a novel idea don’t you think?

Shame we only Got to do it once (would have been another fantastic piece to do in a variety of settings. It was “tour-worthy,” and I don’t think anyone in the audience had seen anything like it. The general public was invited and folks from East Baltimore came to basically denounce it (because I dared to use the word “East Side” and that was all their turf, even if nobody had celebrated their East Side before, or since). But ultimately, they had to admit that it was a wonderful presentation and realized what the rest of the audience felt. It was like being transported in time. All of the scenes portrayed an earlier time for Hopkins, and for Baltimore City.

So I recently parted ways with my “Telling: Baltimore” troupe. This is my cast at Center Stage. Damn, they wuz good. We performed excerpts at three schools in Baltimore, and also at a CODE OF SUPPORT event in D.C. at the WW2 Memorial. The cast just got better and better. We started rehearsing back in July, and as time went on I knew this was something special. Not only was it one of the most profound experiences in my life, but I felt like I got much more from them than they realized. They were so open about psychological wounds they’re still dealing with. 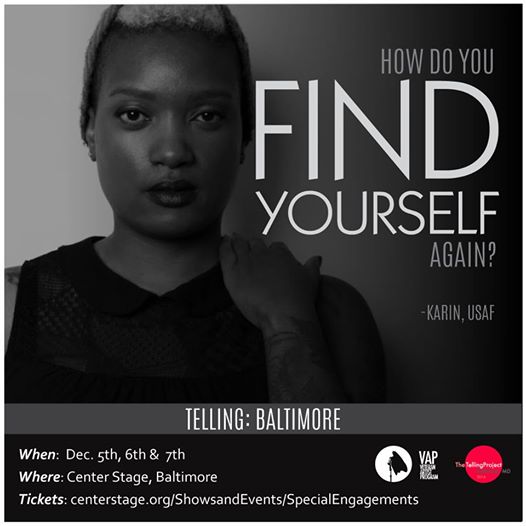 One thing I realized, people have a “funny” concept of hearing veterans talk about their experiences. They think they’re prepared, but when they hear some inner truth, maybe a truth about firing a gun, about hearing what it feels like to be up close n’ personal to your enemy — and knowing you’d have to do whatever it took to destroy, to kill that enemy…….I’ve seen several instances where people where a bit taken aback, and fell into the trap of thinking that the military and soldiers are less than human. But I think that’s largely the result of performing this at a medical institution. Or should I say an “enlightened” medical institution. Where that enlightenment actually lies, I couldn’t tell you. But interacting with students and staff from the different schools, that was very real, very LIVE. All-n-all , I can look back and be proud that I participated, that I gave something back……….

Here are some quickie highlights that aren’t strictly RECENT ACTIVITY….but timewise I’m all over the place. So we’re looking back on the last decade (and longer).

This gorgeous program (below) is the production in Houston. The 3rd production of mine in Texas. And it was mos-def a goodie. The review in the Houston Chronicle was spectacular. I woke up the morning I saw it and rode my (rented) bike to the theatre. Showed it to everyone there who hadn’t seen it. Then rode back to my apartment room and cried at how good the review sounded. A lot went into getting a review that good. Ahhhh Life. Man……it was moments like this that make me nod my head from side-to-side. In wonder. In complete wonder. 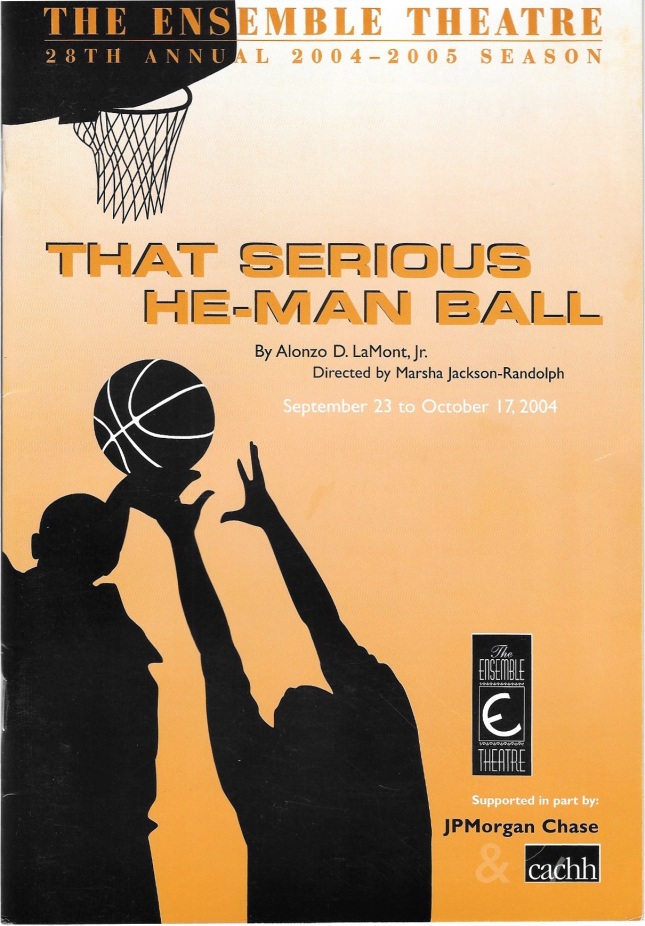 The Goodman in Chicago…..the critic who wrote me a so-so review eventually “Vivisections” included it in the “must-see” weekly events category. She’d erroneously claimed that August Wilson’t “Joe Turner’s Come and Gone” had been produced before “Vivisections”. It hadn’t. She tried to brush off my stuff. Then realized I was in category all by my lonesome. 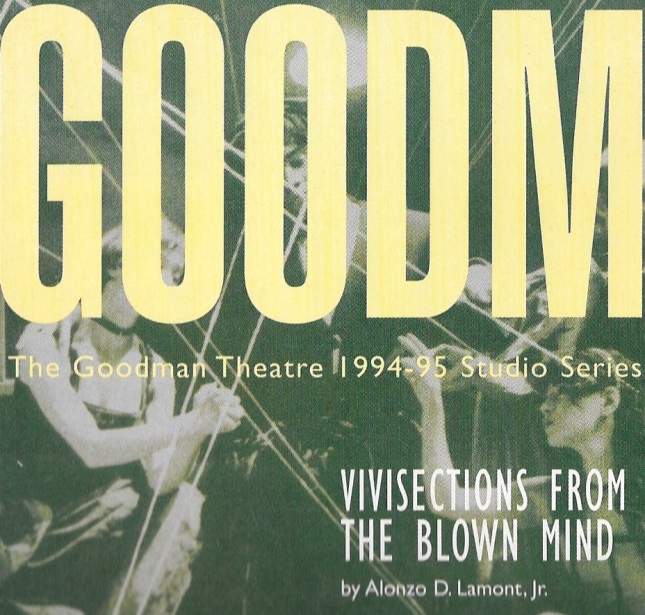 And here’s “Vivisections” in D.C. at Arena Stage. Zelda Fitchlander (I believe it was Zelda, she was Director of Arena) came to tell the cast that (after our MARVELOUS reviews came out) that she hadn’t realized what they had on their hands. They thought they were getting a Rap Musical. Something frothy and trendy to capitalize on the Rap Phenomenon. “Lord, does Lamont make us think”.

Had to include this Chicago Defender 2014-12-17 0029  from the Chicago Defender. The black press in ChiTown. See, the black press gave me the same glowing review for “HE-Man Ball” (the Amsterdam News). It works that way it seems. I’m sure that’s the case for many a black play. But, hey the big dif in this case — they were completely right —– AGAIN! Like they say, it ain’t braggin if you can do it.

And here’s another Texas production. “Vivisections,” from Austin, Texas. Oh man, I didn’t get there but heard they LIT IT UP! I was surprised they used such a young “Dusty” (he’s a boy!!!), when I’d only seen him as a teenager. But I think their instinct was on the money. 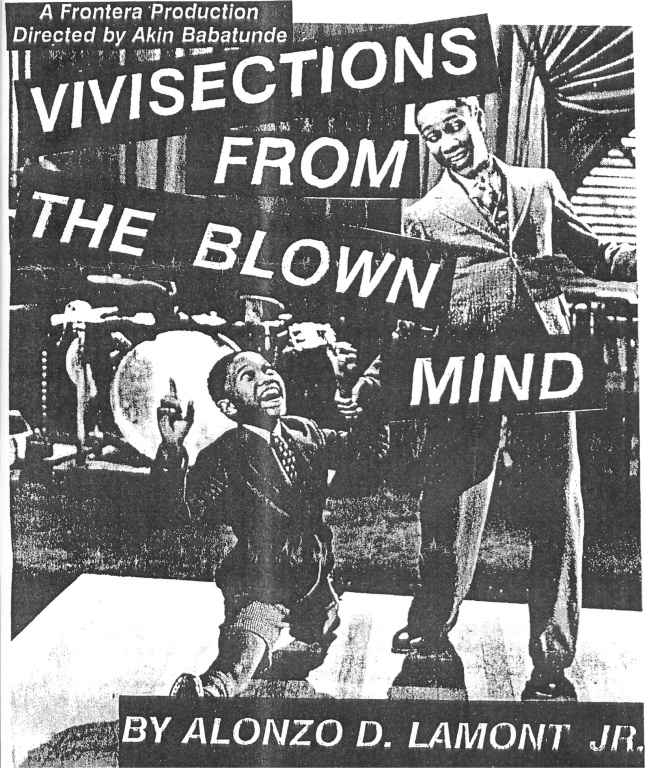