This past week came up big. I FINALLY got an article that I spent a long time on published. Online. 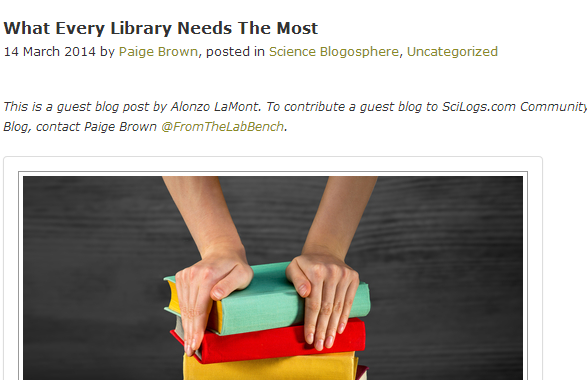 It’s a “healthy” read and  (I must say) quite informative. I pitched my idea to Paige Brown at SciLogs, and they liked it. Took a while for the Library to approve it, but I feel satisfied at the results. Paige didn’t really edit too much. She could have. But, my ego says, “why?”

I did a reading at the Fells Point Corner Theatre today. It was a historical play about the Palestinian/Jewish conflict. I had fun. Played a Palestinian Diplomat. Something tells me that I could be doing more. We’ll see. Haven’t read somebody else’s stuff in ages. Nicole LOVES when I do outside work, particularly in theatre. Here’s a video I made for the “Welch Library Battle of the Bands.” We only had 1 hr to rehearse (the rules). I bought a used skirt and Nicole cut it short, THUS my “homemade” kilt. We’re so bad we’re good.

Ohhhhh Lawdy…….. we havin BIG FUN at the Welch Medical Library, folks. There are 3 other libraries who’re doing Celtic-Themed songs. I’ll post ours to Facebook on St. Patrick’s Day. Did love the kilt though. The “Lord of the Dance” song is by Sydney Carter. This is the week that I’m taking off for my Birthday. I always feel so full of optimism in March. I always think something good, something special is coming my way. And why shouldn’t I? I don’t know how old I was when I started thinking this way, but it sure stuck. When I say “something good” I mean a creative opportunity. An ARTISTIC opportunity. I’ve been asked to direct another video for the Center for Education Resources at Hopkins University. But I’m aiming for something a bit more grand. “Zulu Fits” was performed in 2011 at the Baltimore Playwrights Festival, and that feels like so many, many ages ago. Unfortunately, I’m too USED to this process. Waiting, that is. I’ve written another play and who knows when Zulu will rise again.

So in the meantime, I apply myself to a little this and a little that. And March is still in full swing. The Video is a regular Hootenanny!