In the midst of all the Holiday/Christmas/Spreading-A-Lil-Joy celebrations that I try and do (this consists of me accepting invitations and arriving places where I’m wined and dined!), I always apply my time with a bit of reading and writing. For reading, I’m stretching the actual finishing off the latest Walter Mosley “Easy Rawlins” mystery, “Rose Gold”.

I’ve read every book about Easy, and find the development that Mosley includes about Los Angeles, starting from the ’50’s, to be a revelation. Half of the fun in the books is “watching” black folks acclimate to LA, and vice versa. Many are from the south, and as readers we’re given an inside peek at how various elements (community, society, police departments, wealth and poverty) influence the world Easy travels through. He changes his perspectives, as do we. It’s almost a cultural travelogue. If you haven’t seen “Devil in a Blue Dress” with Denzel and Don Cheadle — it’s an absolute must read AND see. Cheadle as “Mouse” is a CLASSIC. Mouse’s motto is shoot first, to hell with the questions! But there are so many juicy visual “film noir elements”, it’s breath-taking. That’s no exaggeration.

I don’t know why “Devil” didn’t become a HUGE hit. It’s film noir Afro-Sheen. I’ve also read almost all of Raymond Chandler’s books, so I appreciate the genre. Also on my to-do list is “Unbroken”. I’d never heard of Louis Zamperini, but just hearing a little bit of his life story is jaw-dropping stuff. How could we know so much miscellaneous stuff and never know about a genuine hero. Beats me. But we don’t promote heroes these days, so I get it. Also on the docket is “High Cotton” by Darryl Pinckney. It’s from the early ’90’s, but I was intrigued so we’ll see. And who says Playwrights don’t read any plays — I’ve staring at “Copenhagen” by Michael Frayn right this moment! It asks great big questions and Frayn wrote another favorite, “Noises Off” (about backstage life in a hit play, well the cast may or may not think it’s a hit play). The audience may be suffering from the same dilemma…….

I also finished writing a short play called “Bagel Shop Smear.” It’s about an incident that happened with a co-worker of mine. It was something I overheard at an office gathering, and the next day asked her about it. This is how I get ideas. Anyway, my co-worker and her longtime boyfriend went to a bagel shop and were approached by the owner. He, playfully, wondered why she was with her paramour, suggesting she could do better. But at the real heart of the interaction are questions, raised by the owner — pondered by the couple — of moving forward as a “Jewish” couple, if that’s what they’re to be? Would this happen? Is this something to be considered? A few “innocent” comments from the owner and the couple realized this was an uncomfortable exchange that hit a bit too close to home.

So that’s all in play this Holiday. But above all, here’s my own 2 cents on the best movie I’ve seen in a good, long while — “Birdman”. Easily the HIPEST movie you’ll see in years. I’m not giving any description, there’s enough out there already. But, the soundtrack ALONE (think jazz drumming) will make you aware that you’ve entered a world that you and Miles Davis (along with a few other true hipsters) could occupy. Yeah, it’s the complete realm of all things cool, baby. 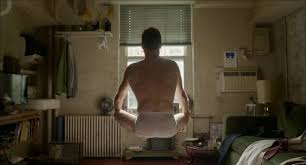 2 thoughts on “Reflections on some Holiday Reading & Writing”