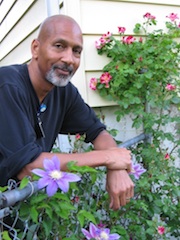 Last weekend I did my 5th Century ride and it was such an inspiration. Nicole and I stayed in Onancock, Va. at a lovely “home and away” house. Fabulous house, 10 seconds from the water. The whole area is the Delmarva Peninsula and it’s a different way of life out there. I like it alot. We stayed from Friday till Sunday and took our dogs Winnie and Ray-Ray. The ride was such a thrill. Some knee problems over the years had me wondering if I had another Century ride in me. But lo and behold, I had a strong ride and my knees held up like champs. I loved the scenery and it was a sunny, sunny day. Man-oh-Man, it was a delight. I did it on my red bike that I did my first Century.

Nicole was there at the end —- that’s salt on my face. And gatorade kept me going all day. I have on about 4 layers because it was VERY CHILLY when I started out. To say the least. But I knew the sun would show up, and lucky for me it did. One of the best parts of the day the lunch stop (below) where a “roving” accordian player and violin/fiddle player serenaded us with a variety of classical tunes, along with some R&B. Very serene and eclectic……..

You don’t usually run across this kind of musical variety on rides. I can’t tell how good they were. But it seems I just have. And the violinist sang his butt off! Also, along the way I ran across this hot little yellow number that I saw several times along the way.

The owner says he averages 26 mph. I’m not surprised. But SERIOUSLY could anybody ride this anywhere but on some rural roads in the county? I think not. You don’t get any style points with this baby.

The satisfaction of finishing is amazing! Me and Nicole had a great dinner out and I’m set on riding at least 2-3 more Centuries this summer. As you can see I’m on a slightly “muscular” ‘cross bike (bigger tires, frame). No one rides one of those on a Century ride. They’re perceived as being too slow. Well they’re a tad slower, but so the heck what?! You can still pound n’ ground. Usually on organized rides you’re surrounded (as I was) by tricked-out-lycra-clad guys on 17-18 pound bikes. Pussys! You can do a ride on any bike, cause as I’ve heard over the years—“it ain’t the bike, it’s the rider.”

One thought on “100 Miles in Nassawadox, VA”